Growth is expected to slow down, while business insolvencies to increase in 2015 and 2016. 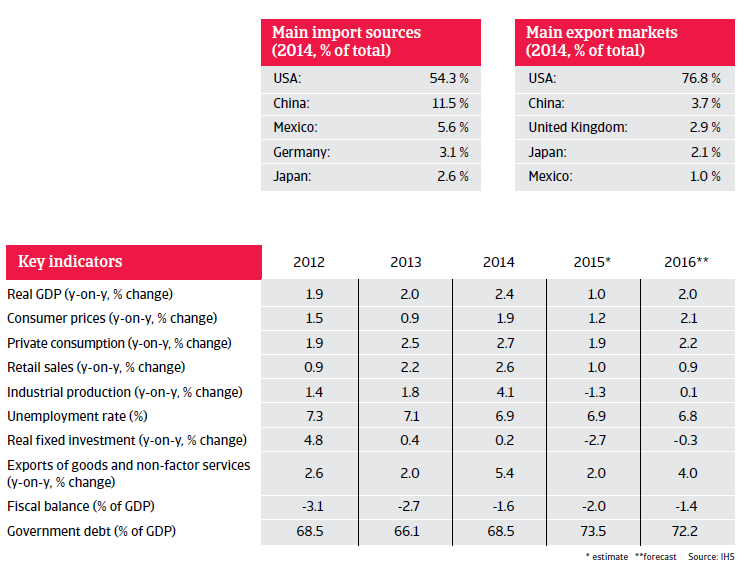 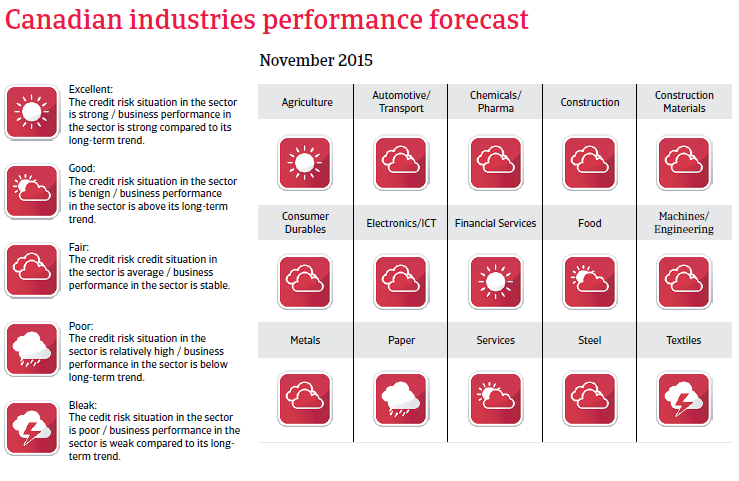 Canadian corporate insolvencies expected to increase in 2015 and 2016

After double-digit year-on-year decreases between 2010 and 2012, the pace of insolvency decline slowed down in 2013 and 2014. Due to the more difficult economic environment and low commodity prices (see report below), it is expected that business insolvencies will increase again in 2015 by 7% to about 3,300 cases, followed by another 1% increase in 2016. 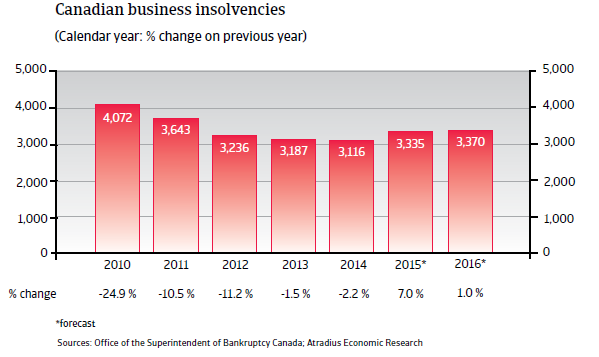 Growth expected to slow down in 2015 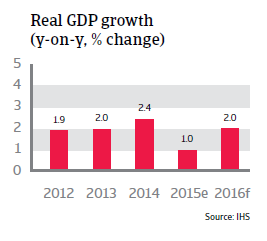 The Canadian economy has seen robust growth since 2010, mainly due to increased global demand for commodities, especially oil. However, as the world´s fifth largest oil producer, Canada has been affected by the steep decrease in oil prices since mid-2014. According to Statistics Canada, GDP shrank 0.2% in Q1 of 2015 compared to the previous quarter and 0.1% in Q2 of 2015; technically entering recession. The GDP decrease was mainly a result of contractions in manufacturing, mining, quarrying, oil and gas extraction and wholesale trade. According to Statistics Canada, in Q2 of 2015 the value added of the mining, quarrying and oil and gas extraction sector decreased 4.5%, mainly due to the decline in the non-conventional oil extraction industry (down 5.7%), which experienced maintenance shutdowns and production difficulties. Support activities for mining, and oil and gas extraction even contracted 18%.

After growing 2.7% in 2014, private consumption is expected to grow only 1.9% in 2015. Household debt expanded in recent years, with most consumer borrowing going into buying homes, as property values have gone up and interest rates are low. However, it is estimated that housing is currently overvalued by about 30%, and household indebtedness has increased to more than 160% of disposable income. This could pose a risk to the economy, especially if interest rates and unemployment were to increase in the future. The unemployment rate is expected to remain stable in 2015 and 2016, at around 6.9%, and inflation is expected to increase only slightly in 2016. Nevertheless, any potential economic downturn in the future could turn the consumer debt issue into a real problem.

Industrial production expected to contract in 2015

In 2015 the Canadian dollar has depreciated further against the US dollar, while the Canadian Central Bank has lowered the interest rate twice, to the current 0.5%. This was seen as a move to boost investments and to make Canadian exports even cheaper.

However, so far, the weaker exchange rate and lower interest rate have not led to a surge of exports of manufactured goods to the US, which accounts for more than 75% of Canadian exports. Industrial production is expected to contract 1.3% in 2015. The potential of manufacturing to compensate for the decrease in the energy sector is limited, as manufacturing contribution to GDP has steadily decreased in recent years (in 2014 it accounted for 10% of GDP, down from 18% in 2000). At the same time, the Canadian manufacturing sector has lost international competitiveness, as currencies of other countries exporting to the US have also depreciated against the USD. Additionally, input costs (often priced in USD) have increased and Canadian wages are high by international comparison.

Energy firms, which account for about 30% of capital spending, are expected to reduce investment by about 40%. At the same time, investment in the manufacturing sector remains subdued. Real fixed investment in Canada is expected to decrease 2.7% in 2015, and to contract another 0.3% in 2016. 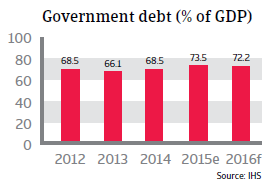 Canada´s government debt is expected to increase in 2015 to 73.5% of GDP, but, as a share of GDP, it remains relatively low compared to the US and most Western European countries. Despite an increase in 2014, the fiscal deficit is expected to remain modest, at 2.0% in 2015 and 1.4% in 2016. However, a higher increase in 2016 and beyond cannot be ruled out after the landslide victory of the Liberal Party in the October 2015 general elections. During the election campaign, the party said that it plans to run higher deficits for the coming three years in order to increase infrastructure spending as a measure to boost economic growth.

Over 50% of very late payments went uncollected by businesses in the Americas.

Competition in the sector is high, and there are clear signs of price wars as the industry is struggling with overcapacity and weaker demand.

Global economic growth is expected to be sluggish in 2016. Bankruptcies remain high in the eurozone and are rising in key emerging markets.