In 2018 the economic performance will be impacted by weaker demand from China and lower domestic demand due to weaker residential construction activity. 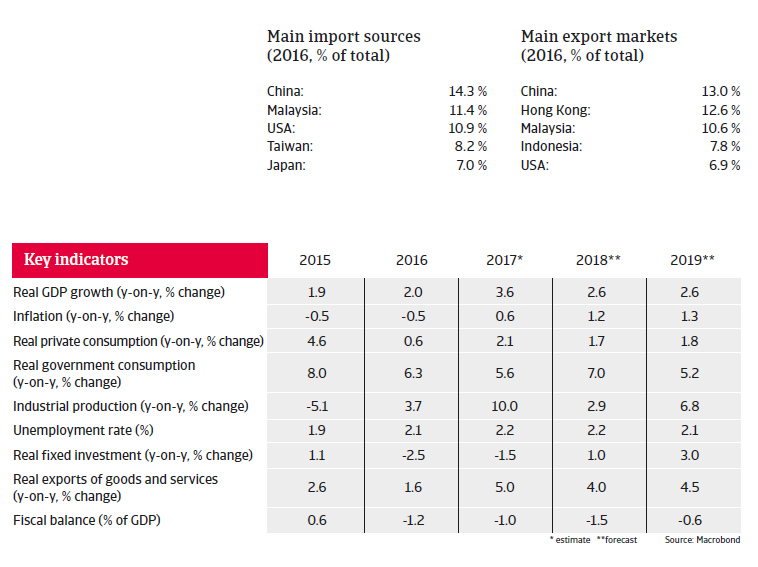 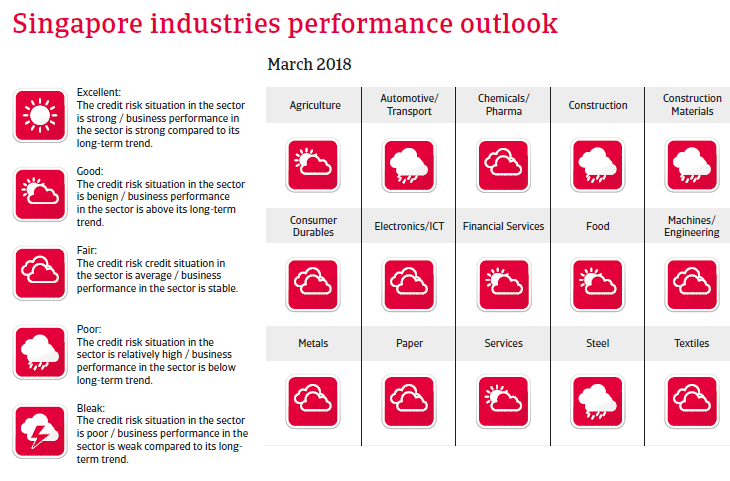 The People’s Action Party (PAP) has been in power since Singapore’s independence in 1965. The PAP is business-friendly but, compared to Western standards, personal freedoms are limited. The opposition is weak and fragmented and has very few opportunities to present itself in public. In the last general elections held in September 2015 the PAP won nearly 70% of the votes, securing 83 of the 89 seats in parliament.

Singapore’s population consists of ethnic Chinese (77%), Malays (14%), Hindu Tamil Indians (8%) and 1% of other nationalities. Income distribution is relatively equal and, in contrast to neighbouring Malaysia, racial tensions are negligible. The biggest potential threat to security is the possibility of terrorist attacks by Muslim extremists, either indigenous or from abroad.

Singapore’s income per capita and level of development meet OECD standards. This city state is the main transport and financial service hub for Southeast Asia, but its economy is somewhat vulnerable because of its high reliance on demand from its trading partners and the focus on certain specific sectors such as electronics and pharmaceuticals. Nevertheless, for a small state the economy is relatively well diversified. Singapore’s banking sector is healthy and adequately supervised.

The city state´s long-term growth strategy is to move away from being just a trade, transport and financial hub and to become a centre of high-tech industry. This strategy has started to bear fruit in the bio-medical sector, and the government has recently begun to extensively promote business digitalisation. 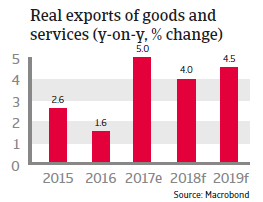 In 2017 Singapore’s economy benefitted from the recovery in global trade and higher-than-expected import demand from China. Exports and industrial production increased 5% and 10% respectively, while private consumption also picked up.

However, economic expansion is likely to moderate in 2018 as Chinese import demand cools down and domestic demand is expected to be held back by weak residential construction activity. In order to support the industry, the government announced it will spend SGD 1.4 billion over the next two years to upgrade walkways and renovate community centres, sports halls, police stations, etc.

The city state continues to be one of the strongest countries in the world in terms of sovereign risk and macroeconomic fundamentals. 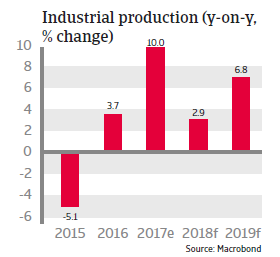 Therefore, and due to the ample foreign exchange reserves and adequate monetary management of the Singapore Monetary Authority, the exchange rate is unlikely to be affected by changing patterns of international investment.

However, due to its high dependency on international trade, Singapore is very susceptible to risks stemming from a hard landing of the Chinese economy and any protectionist measures taken by the US government in its trade policy towards Asia.

Smaller contractors continue to suffer from tight cash flow and deteriorating margins due to a lack of projects and higher labour and rental costs.

Late payments from domestic and foreign B2B customers were reported more frequently by respondents in Singapore than by their peers in Asia Pacific.

With Atradius Credit Insurance you can trade with confidence and explore new markets or products, knowing that your business is protected against credit risk such as the insolvency of your customers.