British business insolvencies are expected to increase by more than 5% in 2019, mainly affecting businesses active in the construction and retail sectors. 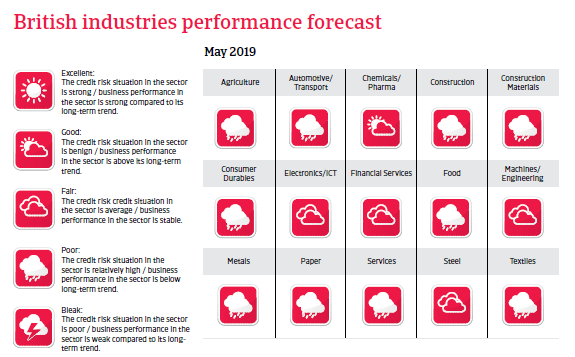 Business insolvencies to increase again in 2019

After an increase of 10% in 2018, British business insolvencies are expected to rise again in 2019, up 7%. This outlook is based on an orderly Brexit, followed by a smooth transition period.

Brexit-related uncertainty has caused businesses (especially large, international companies) to delay investment decisions, which has a significant impact on smaller firms down the supply chain. The construction and retail sectors are the most affected by increasing insolvencies. 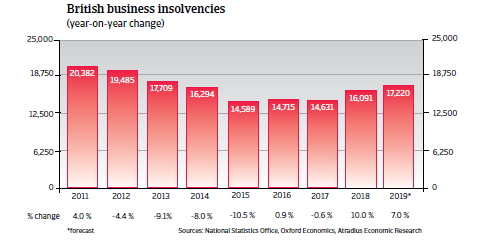 In the aftermath of the June 2016 Brexit vote the UK economy remained resilient, and GDP growth did not record a major slowdown in 2018. UK exports have benefitted from increased international competitiveness due to the weaker pound.

The economic expansion however started to slow down in Q4 of 2018, mainly due to increased Brexit-related risk aversion, strained household finances, and weaker global demand. With lower momentum entering 2019, this year’s growth forecast has been revised down to 1.4%. Due to the lower growth outlook it is expected that The Bank of England will keep the benchmark interest rate low at 0.75% for the time being.

However, those forecasts are based on the assumption of an orderly Brexit and a subsequent acceleration of growth in H2 of 2019, supported by stronger household spending power, a rebound in investments and increased government consumption. A hard Brexit would immediately lead to a downside revision of the forecast.

Besides the potential repercussions of Brexit, another potential downside risk is the increase in consumer debt, coupled with stagnant household incomes. Household debt has increased to 140% of household disposable income, and this poses a potential risk to the financial sector.

The UK sales outlook for consumer durables in 2019 is more subdued as household finances are strained and private consumption growth is decreasing.

Despite efforts of food exporters to diversify shipments away from Britain, a hard Brexit remains a major challenge, also for shipments to mainland Europe.

As many building materials are imported from the EU tariffs or limits on quantities imported after Brexit could lead to higher costs and material shortage.